Let's not beat around the bush. As of February 2023, Notion is the most feature-rich and commercially successful note app that NoteApps.info has ever analyzed. Even among the second-generation note taking apps (those launched between 2014-2018, including Coda, Bear, Notejoy and Taskade), which, as a group, are the most popular choices in 2023, Notion is in a league of its own as the most celebrated modern note taking app.

While Notion has many strengths, its "cornerstone feature" is the flexibility of its table implementation. First generation note apps like Evernote and Onenote treated tables like any other type of formatted content. They could help you separate text into rows and columns, and that was about it. Notion realized that tables could be something much more powerful: databases, complete with column types. By making it (relatively) easy to embed a typed database into a note, one is availed a mind-boggling assortment of ways to view the source data. Notion lets expert note takers present their database as a Kanban board, a calendar, a task list, a personal CRM, a product roadmap, or hundreds of other embodiments made available through seemingly limitless templates that Notion makes available out of the box to anyone with time to browse their template gallery.

And yet...you're here. Why do Notion users defect in spite of the 185 (and growing) features Notion offers? For many users, the question is the answer. Apps like "Apple Notes" and "Google Keep" still have more users than Notion because they're approachable. It feels like they can be "mastered" without dedicating time to learn their ins and outs. Not to mention, the simplicity of an app like Google Keep makes it possible to find the features you need from the first time one opens the app.

Other common gripes with Notion include "sluggish performance," "the mobile app," and "being forced to decide where each note should be placed in the note hierarchy." Notion will never be mistaken for a "lightweight" note taking experience. To note taking experts (and presumably, the Notion team) it must seem "backwards" that some users would seek out alternatives because their app is too robust, but, inasmuch as there is a "problem" with the most commercially successful note taking app, that seems to be it.

For users who want a blend of Notion's best features, our research highlights four apps that stand apart as favorite destinations for past Notion users. Most of these apps have Notion importers, as well as supporting most of Notion's features. 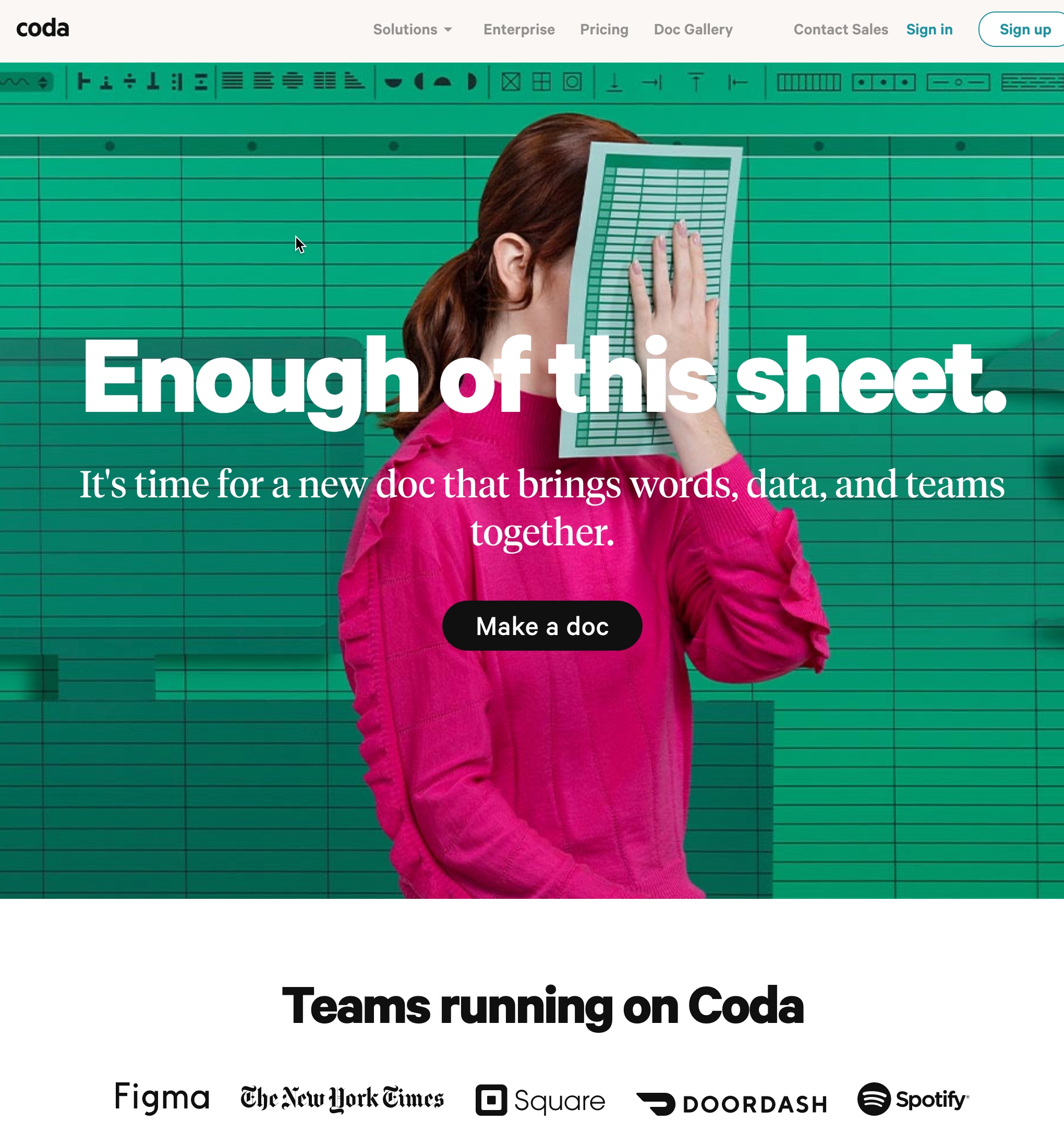 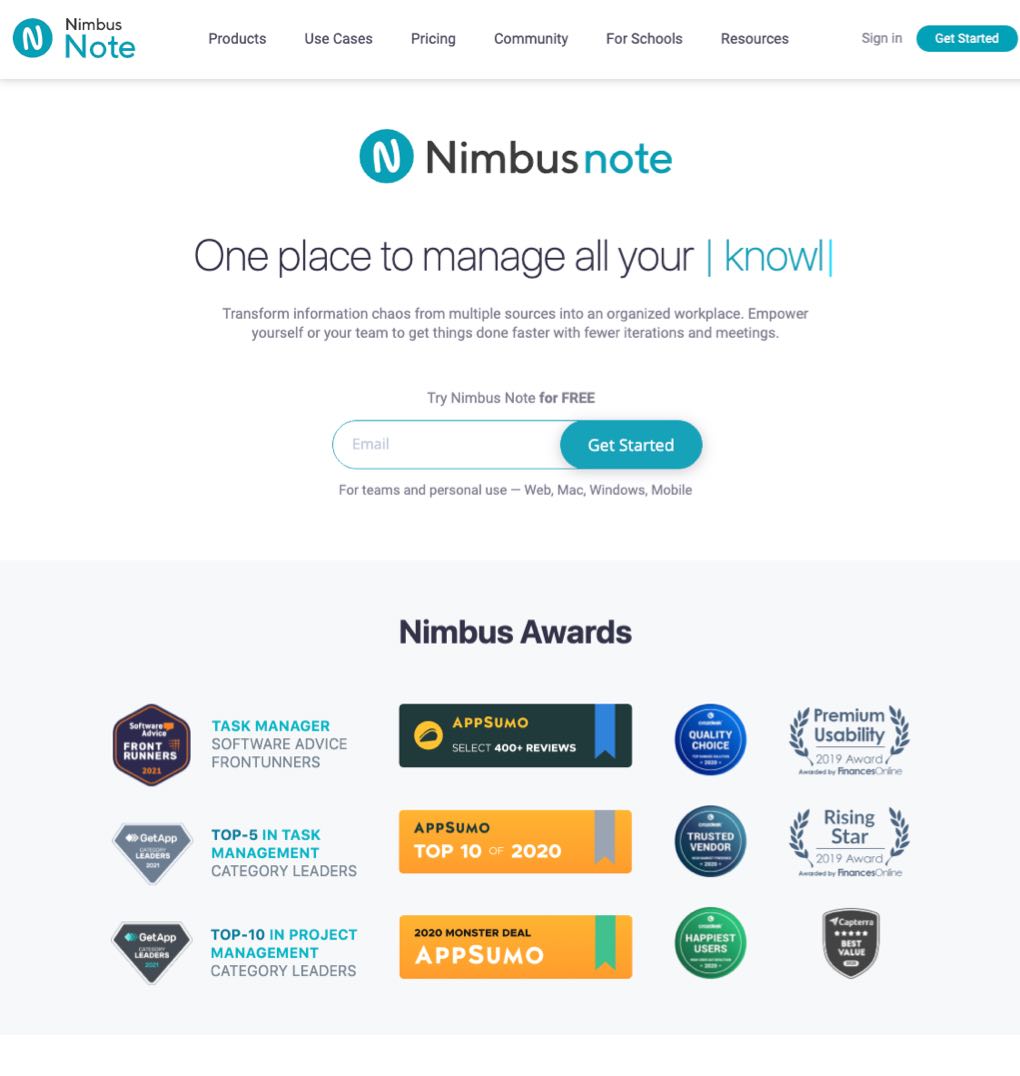 Nimbus Note is one of the three products offered by Nimbus Web and their app portfolio aims to cover a large set of features and use cases. Nimbus Note capably enables traditional note-taking features for information capturing and note organization, while also offering Notion-like elements such as page publishing, table support and multi-column layouts.
Craft
Craft vs Notion full comparison
146 features catalogued • Launched 2019 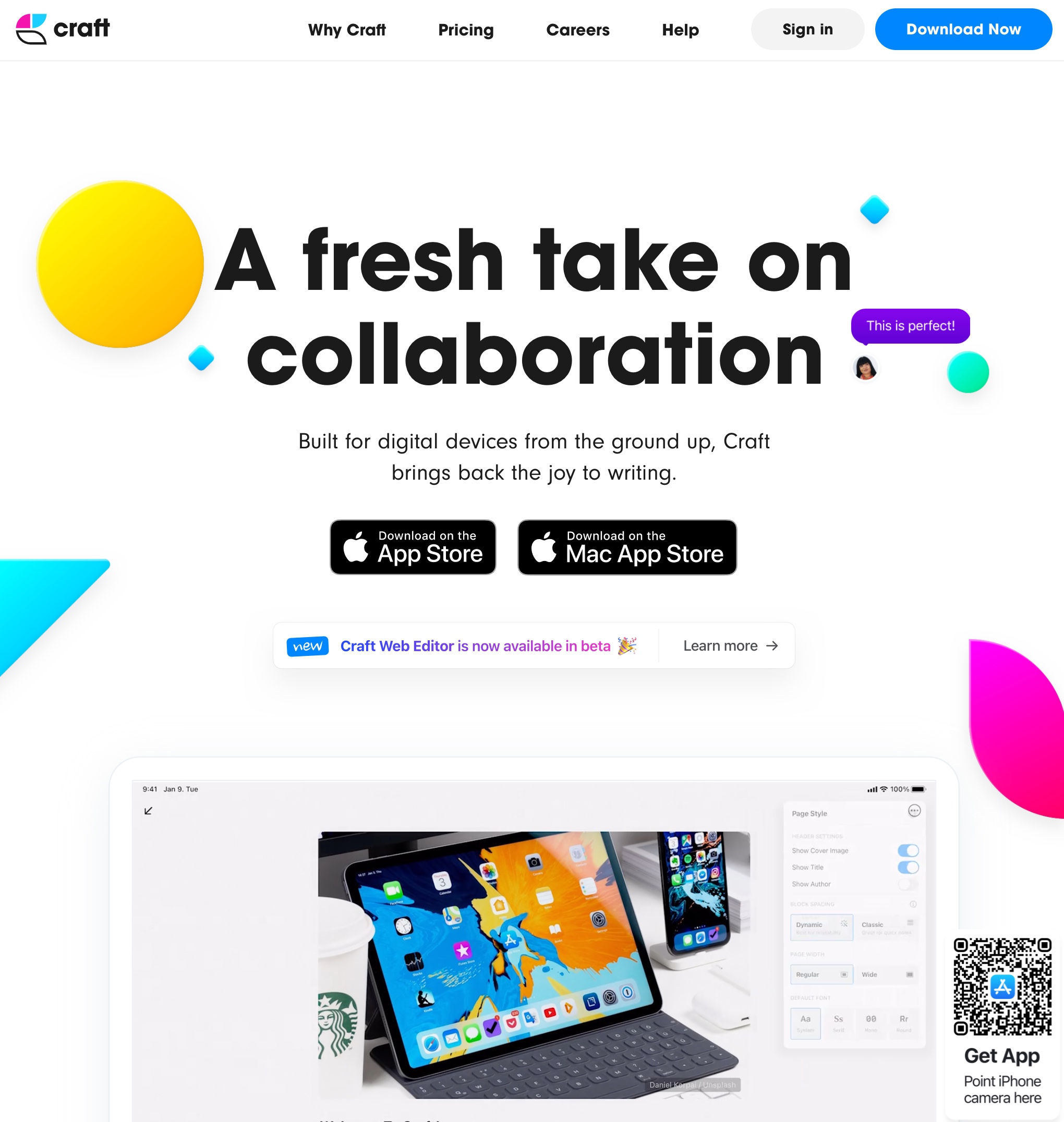 The core of Craft's strength is to provide fluid access between designing, linking and publishing documents. Even without the powerful DIY potential that is Notion's database support, Craft has established itself as the alternative for beautiful, collaborative documents, with better-performing Apple native apps.
Amplenote
Amplenote vs Notion full comparison
200 features catalogued • Launched 2019 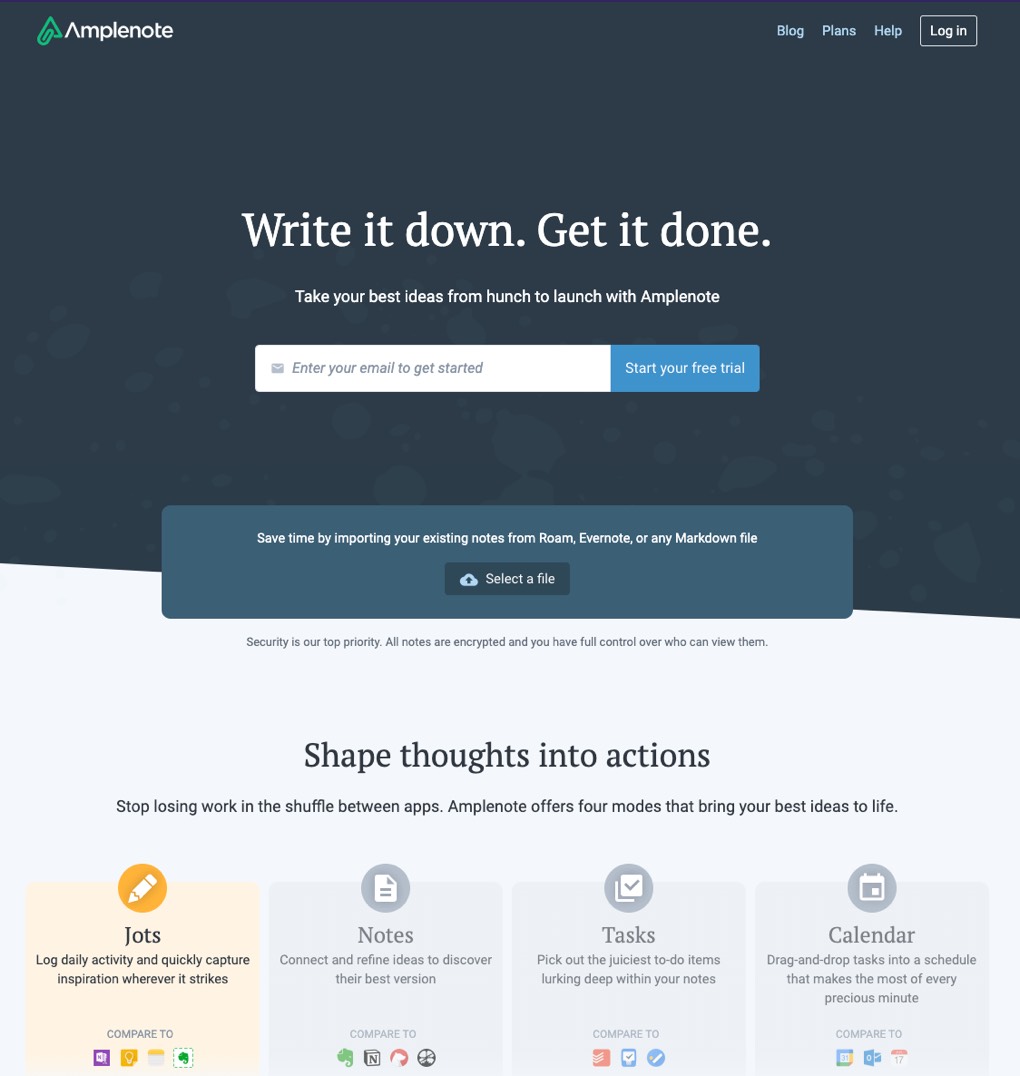 Amplenote is the alternative for Notion users that seek a less complex, more secure "all-in-one" type-of-app that doesn't lock you in. If you're using Notion tables for your tasks, Amplenote replaces table rows with first-class to-do lists. The focus is on the features that promote getting stuff done-- such as time-blocking and the auto-sorted "Unified Task List."

Choose a platform and at least one feature group below. Results will be sorted by which note apps share the most features with Notion, with precedence given to apps that offer a superset of the features you expect.

A general summary of each app compared to Notion is provided from Google results below.

How the most popular note taking apps compare to Notion generally

Want to dig beyond personalized note app recommendations? Here's how the rest of the field compares to Notion as of 2023. All note apps are sorted alphabetically.

Amplenote and Notion share a lineage that descends from Evernote, as evidenced in the visual arrangement of the apps. However, the apps are more different than alike. Amplenote offers a "lighter" app experience -- one that loads more quickly than Notion, offers one tap access to add new to-do items on mobile, and is more focused on security & encryption. Like Notion, Amplenote allows publishing notes, and linking between published notes. The two also both promote organizing notes into a hierarchy, but Amplenote allows multiple hierarchies to be applied to any note, which is a key advantage for Zettelkasten enthusiasts.

Apple Notes vs Notion are about as apples-to-oranges as you can find between two note apps. Apple Notes focuses on offering simplicity and speed. Notion provides robust features for power users.

For teams that assign tasks to one another Asana has a clear leg up over Notion. As Interkef puts it at https://interkef.com/tasking/asana-vs-notion-ta..., "Asana will cost you ten times more then Notion. When you need a dedicated task management app, absorbing the difference in price is inevitable."

In recommending Bear over Notion, users inevitably point toward the speed and simplicity advantage Notion has. Then they follow on by pointing out the price advantage Bear has. This article on UseJournal https://blog.usejournal.com/why-bear-is-my-new-... summarizes it nicely:

Most recently I have settled on Notion, which is a wonderful tool, I should preface this with. The only thing with Notion is that I have all of my notes specifically set up, and if I want to take something quickly, opening up Notion and navigating to that folder ends up being more of a chore than you might think.

This is such a classic showdown that Coda built a page specifically to address the differences: https://coda.io/@john/coda-notion. At the end of the day, they fulfill very similar use cases of helping teams collaborate on creating documents, spreadsheets and databases. If you love Notion but want to try something new, Coda is probably the first alternative note taking app that you explore (if you can afford it). Especially if your primary Notion use case is "collaboration with your team."

If you move FROM Notion TO Evernote, the internet thinks you're doing it wrong. As of 2020, Notion is the superior app in almost every meaningful way.

This reddit thread offers a summary by a knowledgeable user on why one might switch from Notion to Joplin: https://www.reddit.com/r/Notion/comments/bse3de.... They mention "Joplin is, to me, a great no-frills markdown editor with some really attractive features. Where it falls short, to me, is in the blend of markdown and GUI that Notion does, in my opinion, really well. In terms of document formatting, it isn't possible to arrange documents in Joplin the way you can in Notion--you're not going to be able to drag for columns. The other glaring flaw, is that because these are just a collection of markdown documents, there isn't the database features that you'll get with Notion. There's no linked pages, there's no "My complete to-do list lives in a single page, but I've got portions of it displayed in their respective project pages", or anything like that"

Nimbus has created a dedicated page to list out the advantages they hold over Notion, check it out here https://nimbusweb.me/nimbusnote-vs-notion.php. As they summarize, "Can’t find your files? Still trying to figure out all the bells and whistles? Nimbus can help you get things done much faster!"

Both apps focus on collaboration between teams. Notion's advantage is a greater focus on tables. NoteJoy does provide an importer for Notion users to check out the difference for themselves https://notejoy.com/help/import-notion

A nicely produced video comparing Notion to Obsidian can be found via EffectiveRemoteWork.com https://www.youtube.com/watch?v=Zzn-Ooat-Fo. Obsidian's advantage is that it's faster than Notion, and security concerns look to be much more top-of-mind at Obsidian than Notion, judging by the available documentation.

Guiding Tech has a screenshot-rich comparison of the apps in their article comparing the two https://www.guidingtech.com/notion-vs-onenote-c.... Their case for Onenote goes "OneNote is still amazing and offers most features you would need from a note-taking app. As noted previously, OneNote is a must for those who are deep in the Microsoft ecosystem."

Austin Grey compares Roam to Notion here https://www.austinrileygray.com/blog/roam-resea.... He raves: "Since making the switch to Roam for my productivity tool, I’ve started to enjoy the ease and simplicity of using the tool. Once I allocated time to develop a system that works for me within the tool, it streamlined my morning routine even more so than my last system in Notion. The greatest difference between the two systems is that I no longer have to store my daily notes page in any sort of hierarchy. Roam automatically saves a track record of my Daily Notes to the database, and they’re always searchable by date."

In a discussion at IndieHackers posed by a Notion user (https://www.indiehackers.com/post/what-are-the-...), a Standard Notes user raves "Lots of good suggestions here! One I haven't seen mentioned is Standard Notes. It's another independently made app, works on all platforms, fully encrypted and open source. You can use it for free but you can also go on a premium plan in order to get more features and help keep them sustainable. Worth exploring for sure!"

SuperNotes comments on their comparison to Notion in an article they published on remote work tools here https://supernotes.app/blog/posts/best-producti.... They see themselves as a tool that can work side-by-side with Notion users. From their article:

"However Notion is still limiting with the fact that you can only have one page in one place - so this is great for standalone tasks and projects, but not ideal for learning or brainstorming (more on that later!). And with frequent updates and great customer support, Notion is a brilliant project management tool."

Productivity YouTuber Shu Omi stated "If Roam and Notion had a baby, it'd be Tana."